There are about a dozen or so common errors and a few key dates to look for when searching and collecting Washington Quarters. A quick summary would include heavy and light mottos, double die obverses, years 1932 S & D,1933 (none), 1934 Light + Heavy Mottos, 1934 DDO, 1937 DDO, 1942 DDO (Denver), 1950 S over D. For photo examples, further details, and more key dates and errors read the rest of the article. 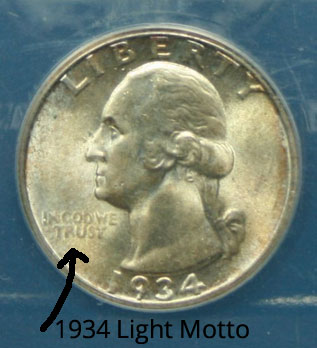 DDO In God We Trust Example Whether by accident or by design, there is only one real set of Washington Quarter error coins: the 1950 D/S and S/D overstrikes. Apparently there was a mix-up when new dies were sent to the Denver and San Francisco mints and many overstrike coins were produced.

Clips: There are many instances of quarters that have been clipped either slightly or clipped hard.

Die Cracks: When dies wear out they crack from usage. They then leave die crack marks when striking the quarter. These coin are usually worth just slightly more than the non error counterpart.

Off Center Strikes: When the die strikes the planchet off center it creates goofy looking strikes that seem to look like they were made with a play-dough fun factory mint set. :)

Since the Washington quarter was constructed with a bold design and wasn't redesigned until the 1776-1976 Bicentennial release and the Statehood quarters starting in 1999, there are no design changes or flaws as there have been in other US coins. However, keeping the main key dates in mind as well as the overstrike errors, you can still find high value coins in the Washington quarter series.

Did this page help you? If so please be sure to share this page with your friends.